Stress has a trigger and a specific response. This trigger may be physical or emotional. It involves the rapid activation of the sympathetic nervous system with a release of adrenaline and noradrenaline, and the involvement of the adrenal glands. They both promote; enhanced vigilance, alertness, arousal, and attention. If the body is seen as a homeodynamic system constantly changing around an equilibrial point, stress can be viewed as an appropriate state which reaches a peak and then returns to a baseline once the stressor has been dealt with. However when the stressors are prolonged, or in excess of the body's ability to cope, its effects can become more damaging.

Stress can be initiated from emotional causes, but also there are more internal physical factors that can contribute to the body being in a stressed condition.They include: inflammation, insulin resistance, obesity and endocrine disturbances. For example thyroid dysfunction can increase anxiety. These conditions can be exasperated by stress, so a feedback loop is created, and the stress can develop into a more chronic systemic condition.

The body's reaction to stress is controlled by both the endocrine and the nervous systems. On an endocrine level it initiates in the hypothalamus (H), and involves both the pituitary (P) and adrenal (A) glands. Therefore it is often referred to as a condition that affects the HPA axis.

The stress response is initiated by the hypothalamus. Many of the functions of the hypothalamus are to do with the control of homeostasis, for example, body temperature. As the hypothalamus governs a number of functions, it is not surprising that when stress negatively impacts upon the body it can affect a variety of systems. For example, sleep, hunger, and sex drive. The hypothalamus receives a number of sensory inputs and from this information initiates an appropriate physiological  response. Corticotrophin-releasing hormone (CRH) is secreted. This results in the release of adrenocorticotrophic hormone (ACTH) by the pituitary glad, which stimulates the production of cortisol in the adrenal cortex. Stimulation of the sympathetic nervous system results in an increased release of catecholamines, norepinephrine and epinephrine.

In non-stressful conditions, cortisol release follows a particular pattern. The highest level occurs between 4 a.m. and 8 a.m. and there is a continual  drop throughout the day, until it is at its lowest between 12 a.m. and 3 a.m., after which it will begin to rise again. There is a small peak around 4 p.m.


Which influences:
Mineralocorticoid release is also stimulated which has a greater effect in stimulating sodium reabsorption and the excretion of potassium. Which will have the effect of raising  blood pressure.

The body is therefore creating a state of alertness so that it can react to the immediate situation. Cortisol also has the affect of suppressing  the immune system, resulting in delayed wound healing. It also has anti-inflammatory actions, in that it decreases the production of tumour necrosis factor alpha, interleukin-1 and interleukin-6, which are secreted by macrophages during an inflammatory response, thereby suppressing immunity. DHEA (dehydroepiandrosterone) is also released by the adrenal glands which has immune enhancing effects, thereby modulating the suppressive activities of cortisol. Cortisol and DHEA are made from the same precursor, Pregnenolone; therefore an increase in production of cortisol will have a detrimental result in the production DHEA, which may impact upon memory, emotional state, and sexual functioning. It is known that DHEA levels decrease with age, and some have postulated a link between low levels of DHEA and many age related conditions, for example Alzheimer's or low bone density, but evidence is inconclusive. It therefore would be more productive to address the issue of excess stress, as this can have a greater affect in reducing DHEA levels. Supplementing with DHEA may be more beneficial when helping to balance it with cortisol levels, rather than increasing levels of DHEA to excess. But addressing the issue only supplementing of DHEA would be ineffectual, as there is a need to address the underlying cause.

During times of stress, the Adrenal medulla is also stimulated by sympathetic activity which results in the release of adrenaline and noradrenaline; causing:


Once the trigger for the stress reaction has been dealt with the body then returns to it  baseline state.. However if the stressful situation continues there will be continual stimulation of the adrenals and release of cortisol etc. Eventually this can result in a condition known as adrenal fatigue.

Long-term stress will have an affect upon  the Hippocampus, which as has been mentioned, obtains a lot of sensory information from various sources, and therefore has an important role to play with integrating that information, and the organising and storage of memory. It is no surprise to note that individuals affected by long-term stress tend to make poor decisions, may have difficulty with processing new information, and in consolidating that information into long-term memory. Long-term stress also has the affect of: decreasing reproduction, the real ease of growth hormone, and also thyroid function. It also reduces immunity, making one more susceptible to pathogenic microorganisms, whIt has also been implicated in the development of an autoimmune conditions. There is also an increase in oxidative stress which can cause damage to neurones, and surrounding tissue.


During the initial phase cortisol levels will rise, and there will be a continual drop in DHEA, leading to eventual adrenal failure. 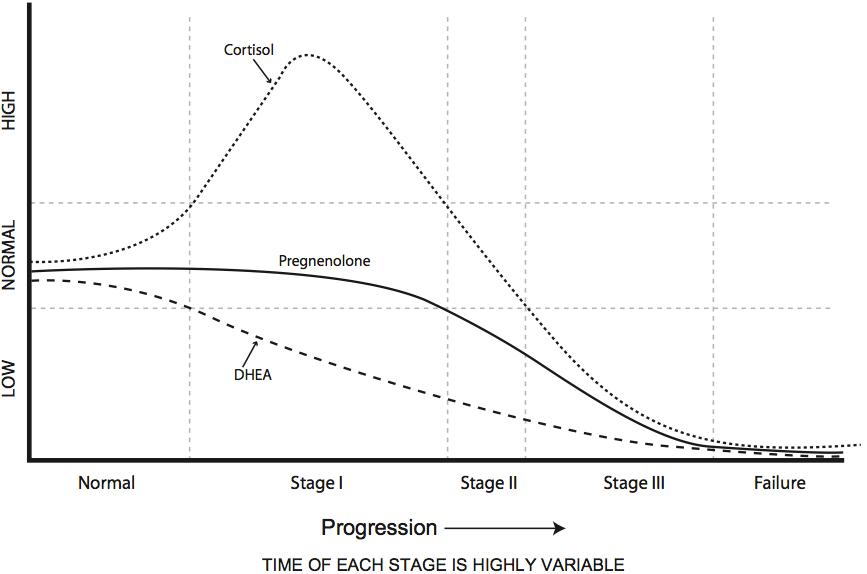 Cortisol
As previously mentioned the stress response initiates the release of cortisol. The function of which is to increase the availability of glucose through the process of gluconeogenesis, that is, the breaking down of glycogen to glucose, the breakdown of fatty acids from adipose tissue, and amino acids from muscle, thereby providing  the energy required to respond to the stress. The release of epinephrine  and the availability of glucose enables the individual to react quickly to the stress response. Once the stressor has been dealt with then the cortisol levels return to their pre-state level. Problems occur when the stress persists. The brain does not distinguish between a stressor out in the environment and one that is initiated internally, for example, worry, or inflammation in the body. They both initiate the release of cortisol. In normal situations once the stressor has been alleviated the body has an increase in appetite cravings, in particular for sweet and salty foods. This makes sense as the body would have expended energy to deal with the stressful conditions. However with psychological stress the opportunity to respond may not be available but the body will still have those same cravings. This will increase the available glucose in the body, leading to insulin resistance and the storage of excess glucose in the form of triglycerides  within adipose tissue, therefore there person will put on weight. High levels of cortisol in the body will encourage this response. Over time the body is unable to respond and adrenal fatigue sets in.  This will lead to disturbances in sleep, blood sugar imbalances, low moods and difficulties with concentration. Also there will be a lowering of immune function and therefore a greater susceptibility in falling ill. The lowering of DHEA and testosterone will also influence mood, muscle mass and metabolic rate.
Powered by